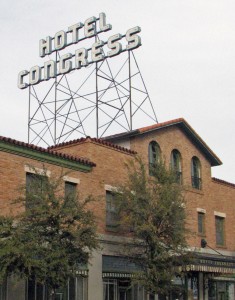 TUCSON — Dillinger Days are held in this city on the third Saturday of each January, giving the locals and visitors a chance to dress in pinstripe suits, felt fedoras, flapper dresses and moustaches. The annual event at the Hotel Congress commemorates the arrest of John Dillinger, the notorious gangster who became the FBI’s first Public Enemy Number One. The mobster and three members of his gang were captured after a fire in the Hotel Congress back in 1934.

Those who attend the celebration get to listen to Dillinger lectures, examine Dillinger-era cars, and tour the lobby of the hotel and gaze at the photo gallery. But true Dillinger fans will be remiss if they don’t visit the Pharmacy Museum on the University of Arizona campus. There, they will find a wad of gum once masticated by Dillinger himself. According to local lore, he stuck the gum under a chair at a local restaurant before eating. When the owner discovered who had been sitting in that particular chair, he rescued the wad, put it on display for a while, then turned it over to the museum.