Some buildings look just like buildings; others can conjure up visions of happy songs, candles and wishes. Three of them are located in the Valley of the Sun and easily recognized because they all resemble gigantic birthday or wedding cakes. Two of them are on the Arizona State University campus in Tempe; the other is in east Phoenix. 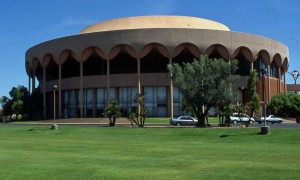 ASU’s Grady Gammage Auditorium is the best known. It was designed by famed architect Frank Lloyd Wright, and was originally scheduled for Baghdad, Iraq. But the building was never erected and the plans were shelved until 1957, when ASU president Grady Gammage contacted Wright about designing a concert hall. Wright produced his old plans, the deal was made and construction began in 1962. Neither Gammage or Wright lived to see its completion. The first event staged in the $2.46 million venue was a performance by the Philadelphia Orchestra, conducted by Eugene Ormandy, on Sept. 18, 1964. The auditorium contains 3,000 seats, all of them within 115 feet of the stage. 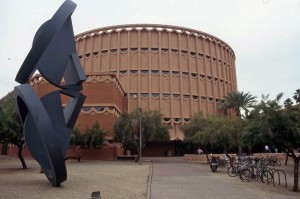 Not more than 100 yards away, the ASU Music Building sort of mirrors the Gammage Auditorium with its circular form, massive size and swooping architectural loops. Built in 1970, it was designed by Wesley Peters, who was Wright’s son-in-law. Music students who attend classes inside refer to it as the “birthday cake building.” It also houses a music theater, music library museum, music research facility, concert hall, recital halls and a hand-carved 1,800-pipe organ. Both structures are visible on Mill Avenue as it turns into Apache Boulevard. 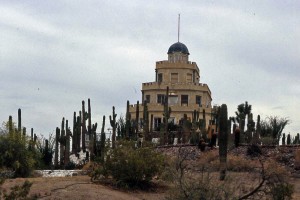 When he erected the building now known as the Tovrea Castle in 1928, Alessio Carrao intended it to be a resort hotel. Working without blueprints, Carraro created a structure in the form of four elongated octagons sitting on each other, then topped it with a windowed tower, so the end result was a building that looked more like a cake than a hotel.

He called it Carraro Heights, but his dream vanished when the Tovrea family installed a packing plant and feeder lots directly adjacent to his property. He eventually sold out to the Tovreas, who moved into the building and stayed there until 1969. The city of Phoenix bought the castle and surrounding grounds in 1993 and has been working ever since to convert it into a reception venue. It’s on Van Buren Street between 48th and 52nd Streets.