NEAR YAVA — Some of those folks in Yavapai County must have too much time on their hands. That might explain why they have painted boulders that resemble a giant frog, a giant skull and this one — a giant duck. 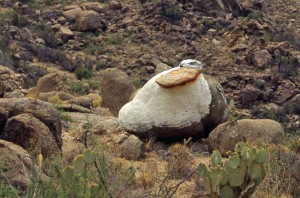 In these parts, they call it Duck Rock and it sits in a field of huge granite boulders. An orange bill juts out from a white body that probably weighs more than six tons. Its origins are hazy. Some say it was painted by high school students; others claim it was done by bored housewives from nearby Bagdad. Regardless of who’s responsible, the big quacker sits at the end of a decent pathway leading to it, but those who go there should be forewarned that the closer you get to the duck, the less it looks like a duck. It’s a matter of perspective.

So it’s best to view the duck from State Route 96, on the south side of the road about halfway between Hillside and Yava.