Saddle up at the Superstition Saloon in Tortilla Flat

TORTILLA FLAT – For more than a hundred years, thirsty travelers have flocked to Tortilla Flat. Once a popular stagecoach stop along the Apache Trail, the saloon anchoring this tiny and resilient community still serves up libations to tourists seeking a slice of Old Arizona.

Located two miles east of the Canyon Lake Recreation Area along State Route 88 – in the thick of the Superstition Mountains – the town of six is presumed to be the smallest “community” in Arizona, complete with a post office and voter’s precinct.

Residents may be scarce, but visitors are not. This region of the Superstitions is known as a mecca for outdoor enthusiasts and treasure hunters. Tortilla Flat remains a pit stop for these urban explorers, just as it did so many decades ago. 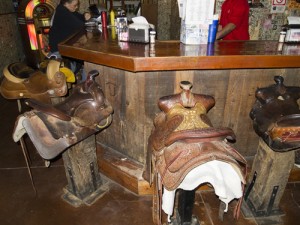 Bang for the Buck at Superstition Saloon

The Superstition Saloon is Tortilla Flat’s biggest draw. On the weekends, don’t be surprised to find a long line of camera-toting Phoenicians and other tourists waiting to catch a glimpse of the unique interior.

This saloon has all the characteristics of your favorite Old West watering hole – a long wooden bar, endless beer and cowboy memorabilia plastered across the walls. However, this oddity stands out for its floor-to-ceiling wallpaper of dollar bills, each note delicately placed and branded by patrons throughout the years. 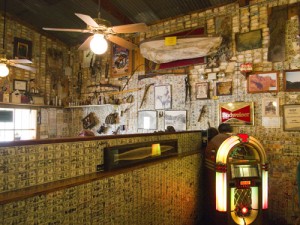 And you don’t merely sit at this bar – you saddle up – on stools crafted from actual saddles. It’s not the most comfortable of accommodations, but worth the leg cramp for this one-time experience.

The menu is stocked with typical pub grub like burgers, tacos and hot dogs. The saloon serves up beer and wine, including a couple specialty brews: Mule Oil Beer and R-R-Rattlesnake Beer.

In the late 1800’s, the Tortilla Flat area was situated along the Yavapai Trail, which connected Tonto Basin with the Salt River Valley. It was used by prospectors, ranchers, Indians and other settlers exploring the Southwest. 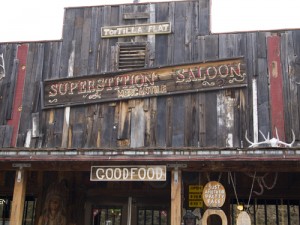 Shortly after the turn of the 20th century, the Yavapai Trail was turned into a freight road for the construction of Roosevelt Dam. The roadway became known as the Apache Trail, and Tortilla Flat served as a popular stagecoach stop for freight haulers. Tourists, mail carriers and other travelers frequented the stop throughout the 1930s.

In an effort to attract more tourists, Tortilla Flat owners Virgil Phelps and Joe Gondek built a small hotel in 1948. It operated until 1987 when a fire swept through the town, pretty much destroying everything in its path. The buildings have since been restored to their Old West grandeur, but the motel is no longer in operation.

The owners attempted to resurrect the motel in 2001 but were turned down by the Forest Service. The old motel, which is located right next to the saloon, now houses a gift shop and post office. The interior of this building, too, is blanketed in dollar bills.