Why Do Rabbits Have White Tails?

Excerpt from Valley 101: The Great Big Book of Life, a collection of Clay Thompson’s columns for The Arizona Republic. (Originally published September 19, 2002.)

Q: Why do rabbits have white tails? They really blend into the background until they run and then you see their white tails like a target. 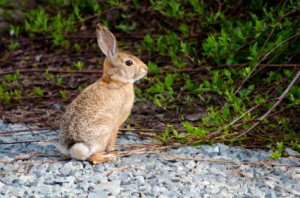 A: There is a school of thought that holds that the cottontail’s white tail is a deliberate giveaway, that without it the animal would be so well-camouflaged that its predators couldn’t find it at all, and rabbits would take over the world. That doesn’t sound quite right to me.

A rabbit’s tail, by the way, is called a scut. It comes from a Middle English word meaning rabbit or hare. Here’s another good rabbit word, fomm. A fomm is a little pocket shelter a rabbit makes by trampling down grass or small shrubs. I don’t know where the word comes from, but if you got it on a triple-word square you’d get 33 points in Scrabble.

Anyway, if you looked at the tail of a desert cottontail, you would see the fur is darker on the top and white underneath. When a rabbit is frightened, it takes off running in a zigzag pattern and flashes the white underside of the tail as an alarm signal to other rabbits.

Sometimes during the chase, the rabbit will stop suddenly and freeze, sitting on the white part of the tail. The idea, I guess, is to confuse its pursuer.

All of this can’t be all that effective because snakes, coyotes, hawks and other predators eat rabbits like popcorn. Something like 80 percent of rabbits don’t make it through their first year.

We think of rabbits as timid, but they can daze a small predator by thumping them with their back legs, which, if you think about, has to be pretty embarrassing from the small predator’s point of view.