Celebrating the Centennial: My Long Distance Love Affair With Arizona

On May 19, 1969, while shivering in my front yard in Jamestown, North Dakota, with a shovel in my hand, a well-rehearsed litany of curses emerged from my frosted lips as I set about removing a small portion of the foot of snow that had plopped down upon us the previous evening. But then, as I swore and shoveled and shoveled and swore in rhythmic fashion, a strange calm came upon me with the realization that life is too short to let myself be permanently attached to a hand-operated snow-removal device. So I finished clearing the driveway, went into the house, and began perusing my collection of Arizona Highways.

And as I gazed upon the splendor of snowless sunsets, the magnificence of 80-degree winter temperatures, the glories of green cactus standing erect as sentinels guarding green winter lawns, it occurred to me that there was nothing major stopping me from moving there. There would be, of course, some minor details. Finding a new job. Moving costs. Selling my parka and snow shovel.

But I did it anyway.

By September of that year, I was living in Arizona.

It wasn’t an easy transition. This was a strange land. A man came to the door of my new home and asked if he could mow the lawn. It was Christmas morning. People put twinkly lights on saguaros. I rubbed my fingers across a prickly pear and spent a week removing the tiny spines. Santa Claus wore Spandex tights and his elves were in swimsuits. I bought short-sleeved work shirts, sold my fur-lined pajamas to a guy from Flagstaff, and didn’t shovel even one ounce of snow.

And as I basked in all this, I remembered those many times I had conjured up my personal vision of hell, not as a place of eternal fire and brimstone, but as a remote frozen location where the temperatures never got above zero, it snowed every day, the wind whipped out of the northwest at 45 miles per hour, and chapped lips and runny noses were part of the dress code.

So I made the adjustment and began an extended love affair with my new surroundings. Like most immigrants, I called back to my former home in January to compare weather reports, laid in a hefty supply of sunscreen, bought several modest swimsuits, scraped my bottom on the Salt River during tubing expedition, and repeatedly fell victim to the charms of the seductive margarita.

But then one day, about a year later, my fellow transplant Steve and I decided that we weren’t true Arizonans until we hiked the Grand Canyon. It was, we told each other, a brilliant idea, fraught with just enough peril to make it exciting, but not dangerous enough to dissuade us from becoming adventurers. We selected a September weekend and formulated a training program that consisted basically of hoisting ourselves onto bar stools and staying there until the call of nature became intolerable. This, we assumed, would give us the staying power required to reach the canyon’s lowest point. 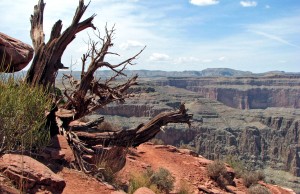 On the morning of what we dubbed “the Great Descendance,” we launched ourselves  into the depths on the Bright Angel Trail. Both brave and stalwart, we took the initial steps with the unbridled glee that normally precedes an mission of this magnitude. During the first hour, we viewed landscapes neither of us had ever dreamed existed, even though we were both avid Arizona Highways fans. The photographs were great, but seeing the canyon walls in person superceded anything ever published. Our pace was steady, our joy was uncontained. And our exuberance reached untold heights  when, four hours after our departure, we reached the Colorado River. We abandoned our usual adult behavior and splashed in the water as children might do during their first encounter with a plastic wading pool. It was glorious. It was probably the most fun we’d ever had with all our clothes on.

Then we rested. After all, we had just hiked eleven miles, stopping only to gawk, point, gush, pontificate, gape, and gaze in drop-jaw wonder at the beauty we had seen. We deserved a break. The trip had been rather hard; there were no flat spots along the trail, so every step was a downward step. That strained our thighs which, due to our training regimen, were more accustomed to flatland bathroom soirees than downhill junkets through the wilderness. Shortly after noon, we arose to begin the second half of what we were now calling “the Conquering of the Canyon.”

Our plan was to make it to Indian Wells, a campground about halfway between the Canyon rim and the river. Since we had maneuvered the eleven miles to the bottom with no problem, we figured an uphill hike of half that distance would be relatively easy. 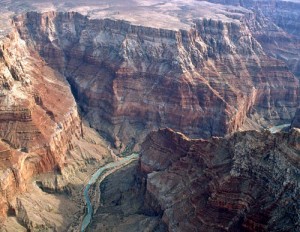 The sun had long since disappeared over the Canyon walls when we arrived at Indian Wells. We were no longer walking. We were staggering. Staggering, reeling and puffing. The fresh Canyon air had found its way into our gear, multiplying its weight by a factor of sixteen-plus. The original pain in our thighs had sent out shoots that found their way into our calves, legs, ankles, feet, buttocks, upper bodies, shoulders and nose hairs. Every step was a direct connection to agony. We flopped to the ground and lay there, two unkempt blobs of humanity, so tired we didn’t even bother to brush our teeth, reduce our supply of Twinkies, wash the grime from our beleagured faces, or say our evening prayers despite the obvious need for them because we still had more than five miles to go.

Dawn arrived. We still had more than five miles to go. And every inch of it was uphill. More than five miles to go. All uphill. There were no flat spots on the way down so we assumed there wouldn’t be any on the way up. Five miles plus. Every step a journey into a garden of pain. Yesterday’s aches had extrapolated; overnight, they had grown into a blend of agony, torture, unmitigated discomfort, and unrelenting ouchies. Only the upper third of the nail on my left index finger didn’t hurt.

And we still had more than five miles to go.

Now faced with the knowledge that perhaps our pre-trip training was less than sufficient, we established a new plan. We would walk for fifteen minutes then rest for five minutes. At that rate, we figured, we could distribute our energy evenly which would let our lungs take a break from all that gasping and wheezing. We bolstered ourselves by recalling that, more than five miles away, all uphill, a cooler filled with ice and beer awaited the two conquerers. We formed mental images of the first beer easing our aches, the second beer reducing the pain, the third beer slaking our thirst, and so on. But, we also had to remind ourselves, the beer was more than five miles away, sitting in a vehicle that was also five miles away. 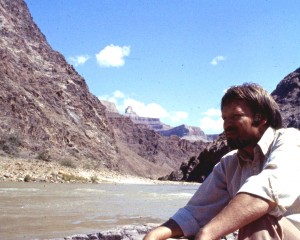 Sam Lowe at the bottom of the Grand Canyon. Courtesty of Sam Lowe.

And so we began. The first few steps, maybe seven or so, weren’t bad. But then, yesterday’s muscular disfigurements kicked in and they were angry at being ignored because we had neglected to bring a masseuse along. We walked for the first fifteen minutes, as planned, then rested for five minutes, then rested another five minutes just to make sure we had established the proper formula. The second fifteen minutes of climbing was shortened to ten minutes; the second five-minute break was extended to ten minutes, plus another five minutes to make breathing adjustments. By the end of the first mile, we were hiking for five minutes and resting for fifteen. By the end of the second mile, we had abandoned all pretense of sticking to our original plan and started walking only when the stuff stopped dribbling out of our noses.

The spectacular formations that had amazed us the previous day were now cruel and heartless trolls blocking our way; yesterday’s breathtakingly magnificent scenery converted itself into a series of endless barriers keeping us from the beer. When we stopped to rest, we barely glanced at our surroundings, instead concentrating on how many steps were in a mile when each step measured less than six inches and took twelve seconds to execute. At one point, we looked for something sharp so we could cut our fingers and make a blood oath that neither of us would ever think this had been a fun day.

But we finally made it. It had taken us more than eight hours to walk the five-plus miles from Indian Wells. We had relied on the beer to keep us going, and our faith in the restorative powers of the amber liquid were well-founded. The first beer hardly touched our lips as it raced down our gullets. By the end of the second, we were congratulating ourselves for completing what we were now calling “the Magnificent Journey.” By the end of the third, we had forgiven the Canyon.

I have returned to the Grand Canyon many times. And now, as I stand on either rim and gaze at its sheer beauty, I think only of its magnificence and the role it played in making me feel like a true Arizonan.

I also return to North Dakota once in a while. But never in winter.