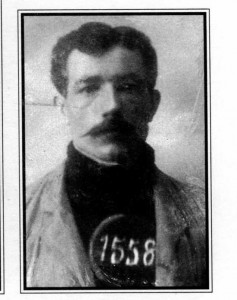 If Joe Boot had never met Pearl Hart, he might have lived an uneventful life as a miner and businessman. But they did meet, and they did plan a stagecoach robbery. They got caught, and the capture catapulted Pearl Hart into infamy but left Joe Boot totally ignored in the hulabaloo that followed. Because she was a female, Hart’s participation in the 1899 hold-up drew nationwide attention. Her trial was covered by newspapers from as far away as New York. She was sentenced to a five-year term in Yuma Territorial Prison, where she entertained reporters, photographers and politicians.

Joe Boot also drew a sentence in Yuma, but his was for 30 years.

Although he was probably the instigator of the robbery, his name was rarely mentioned in the press coverage. And when it was, it was in a derogatory manner. He was referred to as “the outlaw with the lady boss,” and “an inept desperado.” He served less than three years, however. Due to good behavior, Boot became a trusty assigned to driving food and materials to inmate crews working outside the prison walls.

One day, he drove his wagon through the gate and disappeared, probably into Mexico. No one ever heard from him, or about him, again.