The Out-of-Place Teepees Near Sacaton 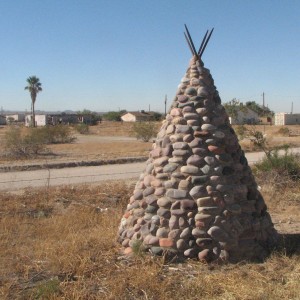 More than 80 years ago, the federal government erected a series of stone teepees (or tepees; tipis) on the Gila River Reservation near Sacaton. There was probably a reason for it at the time, but today nobody knows for certain why they were built. The assumption is that they were supposed to mark the reservation boundaries, but they were wrong both geographically and demographically. Members of the Gila River tribes never lived in teepees; their homes were mostly made of adobe brick. And teepees were common to Plains Indians, not those living in the Southwest.

Regardless of that, about a dozen of them have survived the assaults of weather, time and vandals. They make good photographic subjects, but non-residents should be forewarned that they’re on tribal land and there are stiff penalties for straying off the highways. The best ones, photographically speaking, are along State Routes 87 and 187.