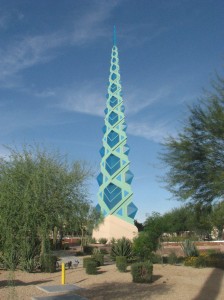 SCOTTSDALE — The City of Scottsdale is benefiting from an error in judgement by the State of Arizona. In 1957, famed architect Frank Lloyd Wright designed a new State Capitol that would have been located in Papago Park, about seven miles east of the existing capitol. One of the design features was a large spire rising from the complex.

But the state rejected the proposal because, they said, it was too controversial. So the plans were stored until 2002, when at least part of them were put to good use. Scottsdale Promenade, a new shopping center in the northeast sector of the city, needed an attention-getting landmark and the rejected spire was just what the developers wanted.

The plan was resurrected and the forty-ton spire was built in 2003, then installed in 2004 at a cost of one million dollars. Now it stands as a sentry on the southeast corner of Scottsdale Road and Frank Lloyd Wright Boulevard. It rises 127 feet above shoppers, and contains 1,700 blue translucent panels. At night, 142 lamps illuminate the spire from the inside, casting a blue hue for more than a mile.