Excerpt from Valley 101: The Great Big Book of Life, a collection of Clay Thompson’s columns for The Arizona Republic. (Originally published April 17, 2001.)

Q: We were hiking near Lake Mohave recently, and we saw plants covered with an orange stringy substance that looked like “silly string.” It had little teeth. What was it?

A: Just as a measure of my self-restraint I am going to answer your question about a slimy, creepy parasite with little teeth that sucks the life out of other plants without making a single reference to my masters. 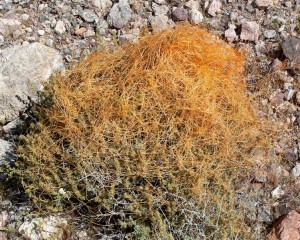 I think this shows great discipline and self-control, don’t you?

What you saw is a slimy, creepy parasitic plant commonly called dodder. It once was thought to be related to morning glories, but now it is classified in the genus Cuscuta, which is certainly more than I wanted to know about it, but there you have it.

It is a stringy yellow or orange plant that twines itself around other plants. It can be very destructive to crops and ornamentals alike.

Dodder does contain some chlorophyll so it can make its own food, but it gets most of its nutrition by sucking water, minerals and carbohydrates from its host. It, of course, does not really have teeth. A plant with teeth would be really creepy. It does have a kind of modified root system called haustoria that it uses to suck the host plant dry. I don’t think that for what I get paid I should have to spell chrysanthemums and haustoria in the same story, but the effort involved keeps my mind from straying from my intent not to mention my masters.

In addition to being a parasite, it also spreads disease. I would list some of the diseases, but many of them are hard to spell. My favorite one on the list was “pear decline,” which is a name I like a lot for a disease. As in: “My doctors says I have pear decline. Cough, cough. I think I got it from my masters.”