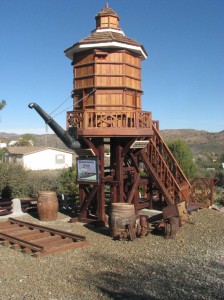 MAYER — The big water tank sitting in Henry Castro’s front yard here is not only attractive, it also serves a dual purpose. First, it’s a reminder that a railroad once ran through Mayer. Second, it stores water in case of emergency. The tank is a small replica of those that once stood next to railroad tracks to service those belching locomotives that ran on coal and water. There was one in Mayer when the Bradshaw Mountain Railroad operated there, but it was torn down when the trains stopped running.

Castro’s tank isn’t an exact replica but, he said, “It sure looks a lot better than a big black tank sitting on two-by-fours.” It holds 1,300 gallons and was placed on a concrete slab so it wouldn’t tip over.

Old railroad buffs and others can view it at 13250 Main Street.