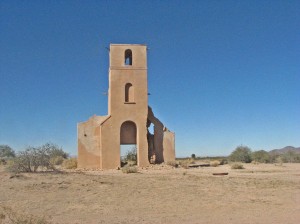 SACATON — Back in the 1950s, St. Michael’s Mission served members of the Gila River Indian Reservation as a place of worship and a gathering site. But the roof leaked during the infrequent rains, and because the building was made of adobe, it began deteriorating so badly that those in charge decided to knock it down. And so they did.

Most of it, anyway.

The main building was razed but the bell tower was left standing, on the assumption that it would eventually collapse. It still hasn’t succumbed to the elements. More than 60 years later, it still stands guard over an expanse of desert slowly being filled with new housing.

Some of it fell off a few years ago, but the rest is still resisting. The remains are off Hashan Keck Road north of Sacaton but getting to them requires a permit from tribal offices.