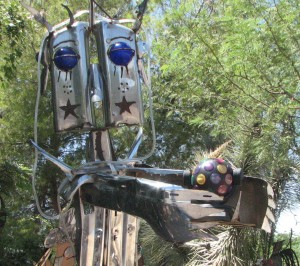 TUCSON — During his lifetime, Jerry Hall was not one to throw things away. Things like car fenders, bicycle pedals, golf clubs, license plates, automobile parts and bed springs. And coffee cans and water heaters. All were once broken and discarded, but then given new life in Hall’s yard and house. Not only new life, but resurrection as objets d’arte.

Before his death in 2010, Hall collected things he found while working as a landscaper. He took the items home and converted them into statuary, creating car bumper cowboys, propane tank caterpillars, hubcap beasts of uncertain ancestry, and funny-looking folks with bottle noses and steel cable arms. Soon his works covered not only his yard, but also the exterior of his home, including the roof. So he moved indoors, covering the walls with marble murals and bottle cap portraits. Before succumbing to cancer, Hall’s last effort was “Mr. and Mrs. Chemo,” made of chrome bumpers.

Much of his work is still visible at 1402 E. Water Street, but those who go there are asked to view from the sidewalks instead of tromping all over the yard.