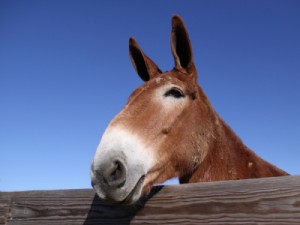 Going back a few years, before the mass migration of green­horns, Joe Felmer was one of Arizona’s better-known colorful personalities.

Felmer did a little scouting for the Army around old Camp Grant in the 1870s and had a little ranch a few miles from the post. He had been married to an Apache woman for a time and considered himself able to match wits with the wily warriors in every way.

One day a small band ran off with some of his livestock and Joe decided to get even. His fertile mind had devised a scheme that would teach the Apaches a lesson they’d long remember. The army was auctioning off some worn-out mules and Joe decided to buy the most useless one of the lot. The mule he picked was a stubborn, sorebacked brute named “Lazarus.”

“Felmers friends laughed as he led Lazarus away. Ol’ Lazarus thinks he’s retired,” a friend opined. “He won’t move an inch with anybody on his back.”

‘That’s jest what I’m hopin’ for,” Felmer replied, ‘The Apache that tries to ride off on his is goin’ to be a sittin’ target.”

Felmer staked ol’ Lazarus out near the house and waited. Sure enough, a few days later, he spotted not one, but three Apaches atop the mule. The one in front had fashioned a bridle, while the other two were digging their heels into Lazarus’ hide. True to form, the mule refused to budge.

“I’ve got ‘um now,” Felmer laughed, reaching for his rifle.

Just as he was about to take aim, the warrior closest to the rear strung a horsehair rope up under Lazarus’ tail and started sawing back and forth. In a flash ol’ Lazarus’ eyes lit up and the vigor of his younger days was miraculously revived. Felmer never got off a shot. The ol’ mule was last seen galloping through the desert, jumping arroyos and dodging cactus with three Apaches hanging on for all they were worth.