The Concrete Iron Man of Bisbee 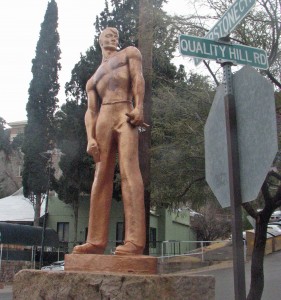 BISBEE — About two years ago, Bisbeeans celebrated the 75th anniversary of a statue. Not just any statue, however. It’s a city icon, standing nine feet tall and weighing in at more than 2,000 pounds.

Although commonly called the Iron Man or the Copper Man, the official name is the Courthouse Plaza Miners’ Monument. And it is neither iron or copper.

Despite the fact that it represents the city’s mining history, the sculpture is concrete covered with copper plating. When he created the work in 1935, local artist Raymond Philips Sanderson utilized a new technique and nearly 200 pounds of copper wire. He fed the wire through an oxyacetylene heated gun and sprayed it under pressure to coat the cement. The work stands in the County Courthouse Plaza, on the corner of Tombstone Canyon and Quality Hill.