The “Flying Mushroom” in Downtown Phoenix 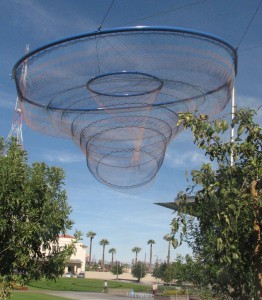 PHOENIX — One of the more recent additions to the city’s public art is large and a bit difficult to understand. Since being installed in the Civic Space Park in 2009, it has drawn considerable comment, not all of it favorable. Artist Janet Echelman called it “Her Secret is Patience,” a phrase taken from a Ralph Waldo Emerson essay. She said the project was designed to emulate the patterns of desert winds but several critics initially called it “an enormous mushroom.” Others branded it “a miniature tornado,” “a wormhole,” and “a fisherman’s net.”

Despite the criticism, the work has been gracefully accepted by those who go see the huge net-like creation that hangs from two rings suspended between two poles that stand from 105 to 145 feet tall. The nets are made of galvanized steel cables and polyester so the piece changes shape with even the slightest breeze. And it changes color as the sun makes its way across the park, located on First Avenue, just south of Fillmore Avenue in downtown Phoenix.