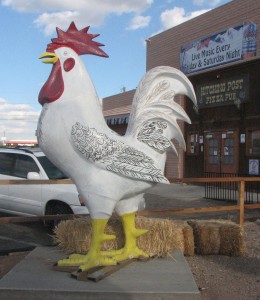 Arizona seems to attract giant roosters the way Hollywood attracts killer frogs and giant spiders. Nobody’s sure why they flock here, but the big bad-boy chickens have clucked their way into such high profile positions as signage for restaurants, roadside attractions and front yard decor.

Among the more notorious is the one that stands in front of the Wisdom Cafe, a longtime Santa Cruz County dining establishment located two miles south of Tubac. It has antlers sticking from its head. Another is the one that caused Apache Junction officials to cry “Fowl” because it was perched on the roof of the Hitching Post Pizza and Pub. The city fathers ordered it to fly the coop, so the owners grounded it and the monster bird now sits in front of the building. 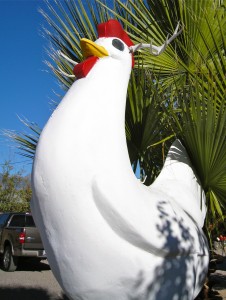 Thank you to Arizona Oddities reader Joe Schallan for sharing this photo his wife Linda captured of the big chick outside of Wisdom Cafe in Santa Cruz County.