Do Misters Play a Role in Humidity?

Excerpt from Valley 101: A Slightly Skewed Guide to Living in Arizona, a collection of Clay Thompson’s columns for The Arizona Republic. (Originally published July 31, 2001.)

Q: My mother wants to know whether the widespread use of misting systems has any effect on humidity levels? 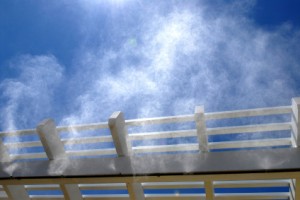 A: I also have at hand a letter from a guy whose mother told him that if you eat something that’s been kept cold in a refrigerator in a metal container you will die. I like your mother better.

In short, the answer is no. Even I could figure that out. This, however, makes for sort of a short column so I passed your mom’s question on to David Runyan of the National Weather Service’s Phoenix office. He is extremely smart.

“Misters are very small scale,” he said. “Thus the effects likewise are small.”

Actually, he didn’t say that. He wrote it in an e-mail, a very thoughtful note on intentional or unintentional things people do that affect the weather.

“In the immediate vicinity of the mister, the relative humidity obviously increases. Multiply that by 100 or 1,000, the cumulative effect grows.

“But at any one given moment, there is something like 20,160 cubic miles (48 miles by 35 miles by 12 miles) of air over the Phoenix metropolitan area. That air mass is always in a state of flux, mixing upward, downward and into and out of the region,” Runyan wrote.

Didn’t I tell you he was smart? Just figuring out that cubic-miles thing was a pretty good trick.

So the gist of it is that there is so much air out there and so much air coming and going all the time that misting systems don’t make that much difference.

If anything, he said, it’s more likely that irrigation would impact the weather more than misting systems might although apparently nobody has studied that around here. In the 1970s, there was a study of weather patterns over areas of Texas, Kansas and Nebraska that determined “unusual pockets of hail and tornadoes were found that may be associated with heavily irrigated regions.”

So tell your mother to mist away. And ask her if she ever heard about that metal dish in the refrigerator thing.