Prospector Joe Mulhatton was a popular burlesquer of facts in Arizona around the turn of the century. Newspapers at the time were more blunt: they called him the most “artistic and consistent liar ever turned loose on a nation.” 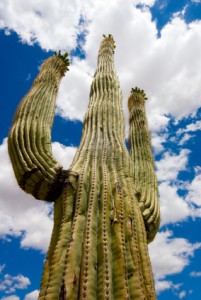 Mulhatton kept a bevy of newspaper editors busy reporting his close encounters of a strange kind in the deserts of Arizona. One involved a cluster of magnetic saguaro cacti down near Florence. He attributed this strange phenomenon to the large amounts of magnetic minerals beneath the soil in that area. Some of the cacti were positive, while others were negative. Some would attract, while others would repel. He told a sad tale about a hobo who ventured too close to one while walking near the Southern Pacific railroad tracks. Suddenly, the hapless hobo was swept into the outstretched arms of a great saguaro which wrapped its octopus-like arms around, squashing its victim. Nearby, another body was found. This particular hobo had strayed too near a repelling saguaro and had been tossed several hundred feet.

Mulhatton claimed to be something of an inventor and one of his main sources of pride was a heat-compressing ma­chine. The idea was conceived one July afternoon near Gila Bend. Joe proceeded to concentrate some Gila Bend heat into a small box. He planned to market these back east to heat large buildings in the winter but first needed to run a test. The Bradshaw Mountains get pretty cold in the wintertime, so Joe decided to try out his heat-compressing machine at the mining town of Bradshaw City one cold January afternoon. He entered the local saloon where early imbibers were huddled around a hot, potbellied stove. Joe didn’t want to create a heat wave, so he barely cracked the lid. There was so much energy stored up in that little box of Gila Bend heat that the resulting explosion sent bodies and the potbelly stove flyin’ through the air. The noise was heard as far away as Wickenburg. Pieces of Bradshaw City were later found as far off as Prescott. In the confusion that followed, Joe slipped quietly out of town.

For those who don’t believe this story—take a trip up to the Bradshaw Mountains and have a looksee. Honest—there ain’t nothing’ left of Bradshaw City!

Joe Mulhatton died during a flash flood in 1913. Legend has it that when he arrived at the Heavenly Gate, St. Peter asked him to recite his deeds and accomplishments on earth. After listening patiently while Joe waxed eloquently on such subjects as magnetic saguaros and heat- compressing ma­chines, St. Peter, signed and replied obligingly, “You can come on in Joe, but I don’t think you’re going to like it here. I’m afraid you’ll find it too boring.”