Excerpt from Valley 101: The Great Big Book of Life, a collection of Clay Thompson’s columns for The Arizona Republic. (Originally published July 28, 2001.) 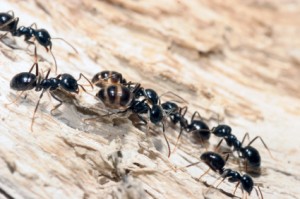 Q: Recently I noticed some black puffballs or seedpods floating in the swimming pool. I tossed one on to the edge of the pool and looked at it closely, and it started moving. It was a bunch of ants hanging on to each other. When they had dispersed, there was absolutely nothing left. What was going on?

A: I guess your pleasure in having an answer depends on how you feel about other species reproducing in your swimming pool. The ants were having a bit of the old slap and tickle, so to speak.

They probably were carpenter or harvester ants, although it is hard to tell without seeing them firsthand, even for such an expert as the estimable entomologist Carl Olson of the University of Arizona.

Olson is the co-author of Insects of the Southwest, which is one of my favorite books, especially if I can’t get to sleep.

I do not mean to be snarky here. It is a well-written and useful book. It is interesting enough to hold the layperson’s attention but not such a page-turner that it keeps you awake for more than a chapter or so. Plus the softcover edition won’t rap the bridge of your nose if the book pitches forward on your face after you fall asleep. I recommend it highly.

Anyway, I consulted with Olson on your question, and he said this is the time of year when a young ant’s fancy turns to procreation.

“We’re in the throes of the mating season. Sex is on the wing, if you will,” said he. “All sorts of ants are leaving the nest and flying away in clusters. What she saw was a big glob of ants, a mass of ant humanity, I suppose you could say.”