Longhorn Grill, an Epic Curiosity in Southern Arizona, Shuts Down 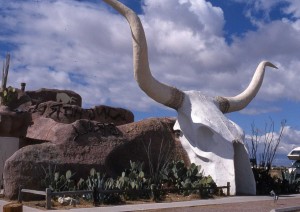 AMADO — One of Arizona’s all-time best oddities faces an uncertain future due to the economy. The Longhorn Grill, a landmark restaurant just off Interstate 19 south of Tucson, has closed due to slow sales that forced a bank foreclosure. The establishment was well-known to travelers because it was housed in a giant stucco cow skull with horns that measured almost 30 feet across.

The building was erected in the 1970s, and appeared in such movies as “Alice Doesn’t Live Here Anymore,” “Vanishing Point” and “Boys on the Side.” Before becoming an eatery, the big skull also served as a bait shop, clothing store and business office. Concrete artist Michael Kautza designed and constructed the mammoth head with its west-facing vacant eyes.

Although the restaurant has closed, the skull remains. The building contains more than 6,000 square feet and can be purchased for $299,000.