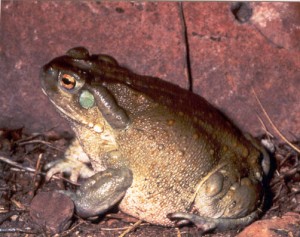 Although rattlesnakes get most of the media attention, Arizona is also home to other creatures that can put the big hurt on those stupid enough to tangle with one.

Male Colorado River toads, also known as Sonoran Desert toads, are a good example. They can be found around Southern Arizona, in both desert and semi-arid regions. Considered the largest toad in the United States, some of them are big enough to fill a small cooking pot, but don’t try it, even if you’re hungry enough to consider making one a meal. The toad can secrete a milky white substance from the warts on its neck, and the fluid contains a toxin that can kill a dog, even if only a small portion is ingested.

Back in the 1980s, a rumor spread through the alternative lifestyle community that licking the back of a Colorado River toad offered a pretty good high. Several people claimed they even tried it without getting sick. But, according to one anonymous source, they did get warts on their tongues.