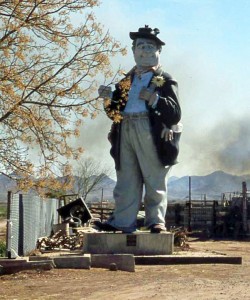 BUCKEYE — When he was at the peak of his career, Hobo Joe stood tall and beckoned the hungry to dine at an eatery bearing his name. He was one of several large figures spread across the United States back in the 1950s to advertise the chain. But when the restaurants went out of business, Hobo Joe was left destitute. Many of his fellow greeters were destroyed; this particular one survived scorn and politics.

Marvin Ransdell built the 25-foot fiberglass sculpture for a local restaurant. When he died, it went to his friend Ramon Gillum, who asked that the statue be placed in downtown Buckeye. When his proposal met with stiff opposition from local officials (some sneered that they didn’t want a bum representing their community), Gillum decided to keep it for himself. After getting city permission, he moved it on to his own property, a meat-processing plant on the outskirts of town. It is now only one of two such artworks left in the country.

Hobo Joe was taken down and kept in storage for years, but the Buckeye Main Street Coalition is working on restoring him to his former glory.
(Visited 1,231 times, 1 visits today)