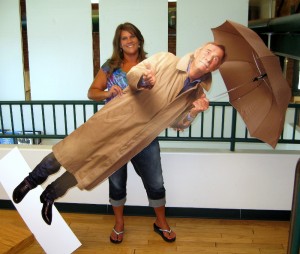 Cutouts of an umbrella-toting Mayor Alan Krieger would have been placed in hotel lobbies to announce Gloom Day.

YUMA — Down here, they’re calling it a “wrap.” But it’s not the kind you eat. The city successfully has wrapped up a yearlong celebration of Arizona’s 100th birthday by promising free food on every day the sun didn’t shine between August 1, 2011, and July 31, 2012. And they made it without giving away so much as a single taco.

In other words, the sun shone at least for a while on every day during the yearlong span. That made the final score: Yuma Sunshine 365, Gloomy Days (and Hungry Guests) 0. Participating restaurants had agreed to provide complimentary meals for registered guests at participating hotels every time the sun didn’t break through. Actually, it was a pretty safe bet. According to the Guinness World Record book, Yuma is the sunniest place on earth, with bright skies prevailing an average of 4,055 hours out of a possible 4,456 hours every year.

Because the promotion was such a success, the life-size cutouts of an umbrella-toting Mayor Alan Krieger were never put to their intended use. Had the sun not shone, the cutouts would have been placed in hotel lobbies to announce Gloom Day. The city is still trying to figure out what to do with them, now that it’s all over. Maybe they’ll make good sunshades.