BISBEE — Long after his death, the folks in Bisbee still talk about Walter Swan and his One Book Bookstore. Swan became sort of a folk hero in the mid-1970s when he wrote a book entitled “Me ‘n’ Henry,” a compilation of stories about growing up in Arizona when much of it was still relatively uncivilized. But he couldn’t find a publisher, so he paid a Tucson business $650 to print it. Then he couldn’t find a distributor so he rented space in a Main Street building for $100 a month and opened the One Book Bookstore.

He called it that because the only thing for sale in the One Book Bookstore was Swan’s only book. He sold more than 8,000 of them at $19.95 each. 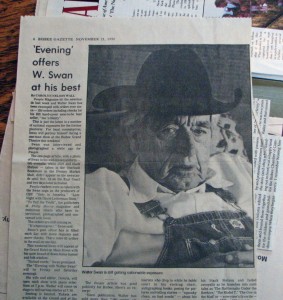 Walter Swan was featured in the Bisbee Gazette because of all the national exposure he acquired. Courtesy of Sam Lowe.

The enterprise was so successful that Swan wrote additional books and sold them at the Other Book Store, located right next to the One Book Bookstore. As sales increased, so did the notoriety. Soon Swan was Bisbee’s most famous citizen, appearing in Erma Bombeck’s column and People magazine, and on David Letterman’s late night show and Bill Cosby’s “You Bet Your Life.”