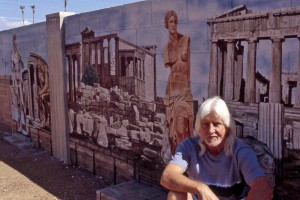 Artist Al Ferguson sits in front of his “Greetaly” mural on the concrete wall in his backyard. Photo Credit: Sam Lowe

APACHE JUNCTION — Al Ferguson considers the concrete block walls that surround so many homes are rather boring. Ferguson, an artist, looked at the one in his backyard long enough to realize that it wasn’t going to be anything but a dull gray surface unless he did something about it.

He turned it into an art work he calls “Greetaly.” Using oil paints, he turned his block fence into a mural that depicts the art and ruins of Greece and Italy, hence the name. The effort includes his version of the Parthenon, the Roman Coliseum, Venus de Milo, a discus thrower and Michelangelo’s “David.” The work is about 25 feet long and six feet tall.

The mural isn’t visible from the street, but Ferguson welcomes visitors who make an appointment. So if you want to see where Geetalians and Italeeks come from, call him at (480) 983-3573.