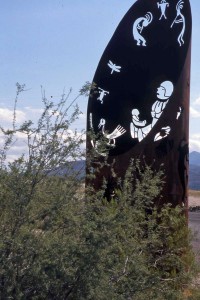 It all started when he began collecting 10,000-gallon gasoline storage tanks, then got a boost when his kids bought him a new cutting torch.

Smith helped remove the old tanks from one-time gas stations and kept them on his property. When authorities told him they had to be moved, he used his new cutting torch to convert the tanks into huge sculptures.

The torch allowed him to cut through the steel tanks like a knife going through soft butter, and carve intricate designs into otherwise unworkable surfaces. A prime example of his craft stands at the Black Canyon City Community Library. It’s a 25-footer named “The Story Teller” featuring silhouettes of Native American figures.

Smith died in 1997, but his art is still prominent in the community. One piece is the marker over his grave — a replication of the famous “End of the Trail” sculpture cut from the end of a rusted old gas tank.