Bret Harte spent enough time around mining camps to become an authority on the art of selling worthless claims to unsuspecting tenderfeet. He wrote rather poetically on the subject:

“The ways of a man with a maid may be strange yet simple and tame when compared to a man with a mine when buying or selling the same.”

One over-zealous promoter distributed brochures back east extolling the mineral riches in the Bradshaw Mountains. On the cover was a picture of an ocean-going, ore-laden vessel steaming down the mighty Hassayampa River.

Unscrupulous prospectors upgraded their dubious min­ing properties in a manner contrary to nature by a process known as salting. Since gold was malleable, it could be loaded in a shotgun shell and impregnated into the rocky walls of a worthless tunnel creating a glittering Golconda. 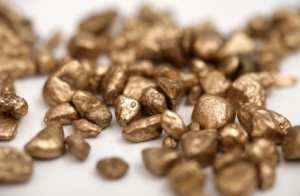 One careless victim bought a silver mine laden with chunks of blackened native silver from an honest-looking dealer. A closer examination of one of the nuggets revealed the partially melted words: United States of America.

Sometimes the property owner became the victim in cases of salting. One of the most unusual happened to a man named Julian, who owned a rather large operation.

When a rich body of ore was found in one of the tunnels, the price of the stock rose dramatically on the local exchange. Three employees offered to sell their inflated stock back to the boss. That alone should have made Julian wary but he eagerly purchased the stock. A few days later the “vein” played out and the stock went back down. Julian lost a tidy sum on the stock drop and became suspicious. When the three Irish miners were asked if they had salted the mine, each innocently denied guilt.

“Would you swear to that on the Holy Bible?” Julian asked. The miners shrugged their shoulders and agreed, whereupon Julian produced an ornate Bible and had each man declare himself innocent. “I believe those men,” Julian declared. “No good Irish-Catholic would dare place his hand upon the Holy Bible and deliberately lie.”

Julian might have gone right on believing their innocence had he not dropped the Bible while returning it to the bookshelf. The book jacket flopped open to the title page. Julian looked once, blinked then looked again. Instead of Holy Bible, it said, Webster’s Dictionary. Those Irish miners had anticipated what Julian would do and had “salted” his Holy Bible.