Giovanni Vigliotto: A Conman with 105 Wives

PHOENIX — In March 1983, one of the jokes circulating around the Maricopa County Courthouse was this:

Question: What has 210 legs, 105 broken hearts and no money?
Answer: Giovanni Vigliotto’s wives. 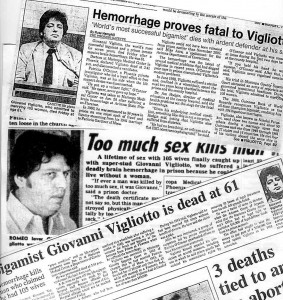 Vigliotto was on trial because he was a marryin’ man of the highest calibre. By own calculations, he wooed and wed 105 women. This created more than the usual problems. For one thing, he must have spent a fortune on anniversary cards. But there was something else — he never divorced any of his wives. Even worse, once he married them, he ran off and never returned. And when he ran off, he took their money and belongings with him.

His victims were single women and were easy prey because they were lonely and he had a knack for comforting them. Once they agreed to marry him, Vigliotto conned his brides into entrusting their money and property to him on the promise that he would meet them somewhere and they would go into business together. But he never showed up at the appointed place.

His downfall came in the early 1980s when one of his victims — a Mesa woman — tracked him across the country and finally found him selling her property at flea markets in the Southeast. He was returned to Phoenix, where he was found guilty of 28 counts of fraud and six counts of bigamy, and sentenced to 28 years in prison. While behind bars, he received several marriage proposals and an offer from a chemical company to endorse their male potency drug.