Arizona has a dynamic and diverse history. Many of yesterday’s relics and landmarks intrigue today’s residents and visitors. Towns like Jerome and Bisbee have staked reputations on haunted hotels, mines and other attractions.

Rhonda Reid and Dwight Hull, of Paranormal Intuitive Investigators in Sierra Vista, seek out Arizona’s well-known and relatively unknown haunts, as well as the history behind them. Here, Rhonda explains what it’s like to be a paranormal investigator, and some of her ghostly encounters:

What is Paranormal Intuitive Investigators?

We travel and search out well-known and lesser-known haunted locations with the hope of capturing the answers to the unknown history of a location, or clarifying the history. Dwight has been investigating paranormal activity for 28 years, and I have been in the field for two years. I am also psychic medium and am able to pinpoint any hotspots at the location we are investigating.

Dwight and I met a few years ago. We both share a passion for the paranormal, the outdoors and adventure, so we decided to form Paranormal Intuitive Investigations. Ghosts have been a part of who we are for most of our lives.

The Presidio of Santa Cruz de Terrenate, located off Highway 82 between Sierra Vista and Tombstone, is a lesser-known Arizona haunt. Courtesy of Paranormal Intuitive Investigators.

What initially sparked your interest in paranormal investigations?

When Dwight was 20, he had an experience with a spirit that spoke to him and grabbed him on his left shoulder during the night. It left red marks that were visible the next morning and sent a chill through his body.  He’s been on a quest to find out what happens after life ever since.

My first experience was when I was five at my cousins’ house in a remote area of Washington state. There was a spirit that lived in their barn named Charlie who I would talk to. He was as real as you and I are. It didn’t frighten me, and in fact, only instilled in me what would become a life of talking to the dead.

How do you find haunted places?

Research, research, research!  Internet, archives, libraries, courthouses, bookstores, etc. Anytime we hear about a new location, we always like to research the history to ensure we have our facts correct, especially with the lesser-known locations or locations where there are rumors or multiple accounts of the same story.

Sometimes, even the “well known” locations have the story incorrect. For example, take the Buford House in Tombstone, Arizona. The story is that a young man named George, who was 21, lived in the house with his father. He was to marry a girl named Petra who was 17. George went away to make money for their wedding and to support her, and when he came back to Tombstone, he saw her with another man. He was distraught, got his gun, came outside and crossed 3rd street, then fired four shots – two of which hit her. He then turned the gun on himself and committed suicide. Petra reportedly did not die from her gunshot wounds.

However – the facts are that Mr. George Buford, his wife and six children lived in the house from about 1880 to 1900. During the early 1880’s, three of the Buford children died in the house. The George mentioned above committed suicide on April 14, 1888 – yet he wasn’t George Buford, he was a tenant named George Daves (it’s spelled three different ways on the Internet), and he was unrelated to the Buford’s. Petra lived down a block on 1st and Safford, not the other direction told in the stories. Turns out Petra lived a very long life, even married and had a son. She died at the age of 89 in 1960. We have coroner reports, death certificates, genealogy reports and newspaper accounts from that time period to back up our facts.

How often do you encounter paranormal activity?

Not as often as you might see on TV. We usually catch a few EVP’s (Electronic Voice Phenomenon) or more during our investigations, but it’s not an exact science. Well-known and unknown haunts yield activity on some occasions and on other occasions, we won’t get any evidence. You just never know when an “active” time is. That all depends on the spirits.

Contrary to popular belief, ghost don’t just come out at night. We have captured just as much evidence, if not more, during the daytime. After all, they are just spirits without bodies. They were people at one time, so there is no reason they would only come out at night. Night investigations simply add the spook factor and make for better TV. 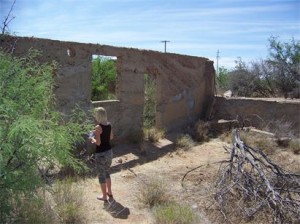 Where are some of the most active paranormal spots in Arizona?

Again, activity depends on the activity of the spirits. However, places like the Bird Cage (Tombstone), Charleston, and the Clanton Ranch generally yield positive results. The Vulcher Mine (Wickenburg), Jerome, Bisbee, Yuma, The Gadsden Hotel in Douglas, are all pretty active, just to name a few.

What are some haunted places most residents don’t know about?

·        The Presidio of Santa Cruz de Terrenate, located off Highway 82 between Sierra Vista and Tombstone

·        Brunckow’s Cabin, off of Charleston Road, where it meets Brunckow Road

·        Lewis Springs, which is an old railway stop that runs along the San Pedro River. It’s located between Charleston Road and Highway 90.

What’s the scariest encounter you experienced?

During an investigation of a farm house in Southern Arizona. When interviewing the clients around the dining room table, the coffee cup that was in front of Dwight slid across the table about 18 inches after he asked the clients what type of activity they were encountering.  Any time an object moves in front of you, it’s a bit unnerving and unsettling, even after all these years.

To learn more about paranormal investigations in Arizona, schedule a tour or request an investigation at a private residence or business, visit Paranormal Intuitive Investigators.