Classic newcomer/snowbird question: We have spent 11 winters in Arizona and still don’t know how to eat a tamale. Since this apparently is the big season for tamales, give us some direction so we don’t look stupid. 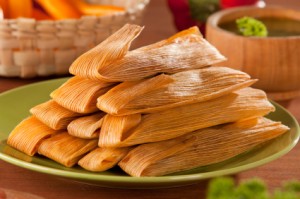 Answer: Mmmm, tamales. I wonder if my neighbor is going to make tamales this year. She brought some over last year, and they were great.

I should start buttering her up. Maybe I’ll wash her car or something like that.

Anyway, eating a tamale is pretty simple, really. You just unwrap it and eat it. Whatever you do, don’t eat the cornhusk.

Nothing will mark you as newcomer/snowbird doofus as surely as eating the cornhusk. Gerald Ford did that once when he was president.

In some of Latin America, they wrap their tamales in banana leaves instead of cornhusk. Don’t eat the banana leaves, either.

Now, I say a good tamale shouldn’t need to be topped with any salsa or anything like that, but maybe that’s a matter of taste.

You’ll want to keep a flour tortilla at hand in case it’s especially spicy tamale. That will help cool your mouth by soaking up the oil-based hot stuff.

Tamales go way back, possibly way back to 5000 B.C. The thinking is they were a military staple because they could be made ahead of time and carried along by the armies to be heated up later or eaten cold.

Tamales also were used in religious ceremonies by priests who made the tamales and offered them to their gods as a sacrifice.

I’ve never had one, but some people make sweet tamales, stuffed with fruit or jam. That sounds pretty good, don’t you think?