What’s the Origin of Chili?

A: We had a chili-cooking contest at church a few years ago, and I won a special prize for being the worst loser. It was a purple ribbon with a rosette. I still have it somewhere. I only mention it because I think it’s important to celebrate our successes, don’t you? 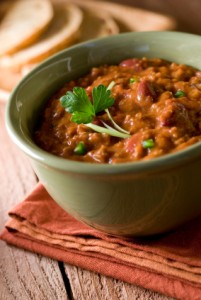 Actually, I only mentioned it to kill time because I am trying to put off dealing with this meat vs. beans thing. Some people tend to get a little overwrought when discussing this issue, and I know no matter what I say, I’m going to spend the next week or so listening to you people complain about it.

Let’s start at the beginning. Chile peppers are native to the Amazon region and early on spread through various Native American cultures.

Of course, chiles aren’t really pepper, like the stuff on your table. That kind of pepper was one of the things Columbus was on his way to the Orient to buy when he ran into the New World. Apparently, he tried some chiles and figured, what the heck, he’d just call them peppers anyway.

As for the origins of chili, it’s hard to say.

There are plenty of accounts of Native Americans in Mexico and the Southwest eating various types of stew flavored with chile peppers.

The Aztec emperor Montezuma is said to have eaten a plate of chiles first thing every morning, which certainly would get your blood flowing, although I think I’ll stick with oatmeal.

It’s seems pretty likely, although not certain, that your friend is right about chili being a Southwestern thing and not Mexican. I found one chili Web site that claimed that until recently the definition of chili in the Diccionario de Mejicanismos was “detestable food passing itself off as Mexican, sold in the U.S.,” but since I don’t happen to have a copy of the Diccionario deMejicanismos at hand, I don’t know if that is true.

What we think of as chili probably originated with cowboys who had plenty of beef around and could always find some wild onions and chile peppers to throw in the stew.

Or, if you are of the bean school, what we think of as chili probably got its start as a kind of bean stew with some chile peppers added to brighten it up a bit.

OK, now—beans or meat? Here’s my bold stand. Only weenies make chili with…Oh, look, we’re out of space. Dang. I guess you guys will just have to decide about it yourselves.