A Lumpy Goose Sculpture in Arivaca 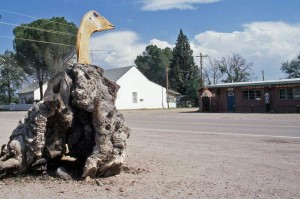 ARIVACA — Main Street here runs about three blocks long with little to distinguish it from major thoroughfares in other small towns.

But the community does have a goose sculpture, and it is a very lumpy goose. Created by the late Robert Friccione, it sits in front of an art gallery and serves as its sign. Friccione was well-known in the area for the benches he created. He used a large mesquite tree root as the creation’s body, and a mesquite plank for the neck and head. And since mesquite roots are very lumpy, the goose is also very lumpy.

Since it’s too heavy to move, the creature sits outside day and night, rain or shine. You can honk at it as you drive by but don’t expect a honk in return. Lumpy mesquite gooses are rather aloof.

Arivaca is about 24 miles west of Amado off Interstate 19.