There Are a Lot of Grackles in the Valley. Where Do They Come From?

Excerpt from Valley 101: A Slightly Skewed Guide to Living in Arizona, a collection of Clay Thompson’s columns for The Arizona Republic. (Originally published November 8, 2001.)

Q: I was born and raised in Phoenix. I grew up with cactus wrens, roadrunners and quail, but where did all these grackles come from? A friend of mine says they were always here, but I think they are a recent occurrence. Can you elucidate? 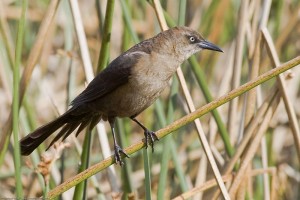 A: I can now say that I looked up “elucidate.”

This is one of several grackle questions I have received lately, and I take it up with some trepidation. A year or so ago I wrote some less than complimentary things about grackles and received a number of calls and letters from people who actually like grackles. I can’t imagine why, but there you have it.

Anyway, in answer to your question, great-tailed grackles have been moving north from Mexico for years. The first record of them in Maricopa County was three birds spotted near Peoria in 1954. By 1970 they were considered common.

Common grackles, which are even less desirable than great-tailed grackles, are another story. They have been moving west since European colonists began turning forest land into farmland. They are still mostly found east of the Rockies, but there have been sightings in Maricopa County.