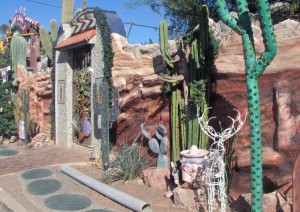 TUCSON — In a roundabout way, a burglar was Gary Morrow’s inspiration when he set out to create a work of art. After his truck was broken into in 2008, his wife said she wanted a wall around their property, so he set out to fulfill her wishes. Armed with Styrofoam, rebar, aluminum foil, stucco, chicken wire, railroad spikes cactus skeletons and his imagination, Morrow began creating his version of a desert scene, one that is gradually encircling their house and yard.

For example, he used railroad spikes to craft a scorpion and aluminum foil for a Cupid. His ocotillos are rebar topped with spark plugs, and a statue of St. Francis of Assisi is made of a saguaro skeleton and plaster. It’s an ongoing project because Morrow has plans for a multitude of additions. “It’ll be done when I’m done being alive,” he said.

His masterpiece is located at 3674 N. Park Avenue, near Gifford Drive.