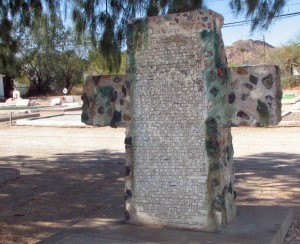 AJO — During his lifetime, Louis Conde was known as a teacher with unusual ideas, particularly for the early years of the 20th century.

After he died in 1931, his wife decided that his teachings shouldn’t end with his death, so she had some of them placed on his grave marker — in an unusual fashion.

She commissioned a six-foot stone cross to serve as his headstone. Even more unusual, the inscription on the marker contains about 400 words. Even more unusual than that, each letter and number was manually formed with copper wire. After being bent into the desired shape, the letters and numbers were soldered to nails and embedded into the face of the cross.

The monument remains in excellent shape after more than 80 years standing near the west edge of the community cemetery on First Avenue between McKinley and Ash Streets.