Walter the Bus is One Huge Gas Guzzler 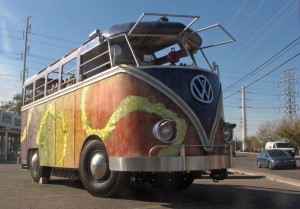 SCOTTSDALE — Some days, while driving east on Thomas Road near 64th Street and the canal, you might see Walter the Bus sitting in front of what once served as a lumber yard. Walter is not your usual people-moving form of transportation. He looks like a Volkswagen bus on steroids. He stands nearly 15 feet tall, is painted psychedelic yellows, reds and purples, and resembles a diesel locomotive when viewed from the front.

The vehicle was once a 1963 Walter Crash Truck, stationed at Luke Air Force Base and designed to spray foam on crashed airplanes. After being declared unsuitable for that task, it went through several owners before Kirk Strawn bought it an had it trucked to Scottsdale from Jerome because it gets only about 1.5 miles per gallon of gas.

Artists and mechanics worked on Walter for almost two years, converting it into a mobile entertainment unit. It spends most of its time sequestered inside the nearby building, but every now and then, if you’re lucky, you can spot it basking in the Arizona sun. For more information, visit Walter the Bus.