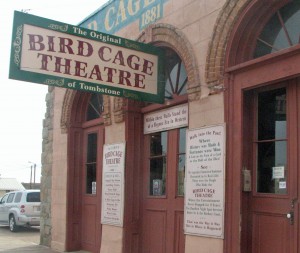 TOMBSTONE — The Bird Cage Theater here was originally built as an opera house – The Elite – but it didn’t serve in that capacity very long. A short time after it was opened, it was renamed the Bird Cage Theater and it quickly became known across the West as the roughest, bawdiest and most wicked nightspot between Basin Street and the Barbary Coast. Instead of becoming a venue for sopranos and tenors, the place became a combination saloon, gambling hall and house of ill repute.

The lower level hosted a poker game that went on 24 hours a day for eight years, five months and three days. The buy-in was $1,000 and an estimated one million dollars changed hands during the span. Among those who sat in were John “Doc” Holliday, George Randolph Hearst, Diamond Jim Brady and Bat Masterson.

And much of the time while all that was going on, Wyatt Earp and Josephine Marcus were carrying on an illicit love affair in a nearby room.