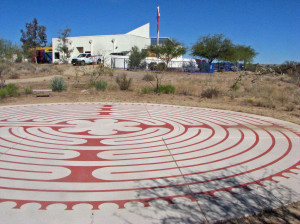 CATALINA — On a hillside just west of Oracle Road, a church sits as a classic example of turning swords into plowshares. These days, all is peaceful and calm as the Montana United Methodist Church and there is no sign of the instrument of war that once lurked directly beneath the plot of ground now covered with a holy place.

Not long ago, Titan II intercontinental ballistic missiles formed a deadly arsenal of destruction in the area. There were 18 of them, each one capable of starting World War III had they ever been fired.

Fortunately, the chill of the Cold War thawed, the missiles were removed and almost all the silos that housed them were destroyed and the land was sold off. One of them was the acreage where the church stands.

Formerly designated as Site 570-9, it had two previous owners before the church acquired it in 1992. Now a white spire rises above the landscape and the children play where a missile once stood ready to deliver a nuclear device 600 times more powerful than the one dropped on Hiroshima, Japan, to end World War II.