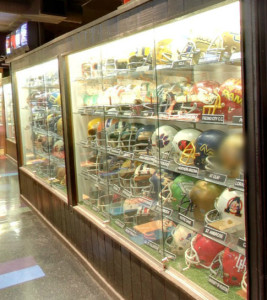 GLENDALE — Max Beyer’s original plan was to hang a few football helmets on the walls of the sports bar he opened in 1979. It was the first establishment of its kind west of the Mississippi River and it needed a theme, so Beyer went with the helmets he had collected. It started small, but it grew a whole bunch. Before his death in the 1990s, Beyer had amassed more than 1,000 helmets, and he put many of them on display.

The helmets came from such well-established football powers as Notre Dame, Michigan, Ohio State, Southern Cal, and Texas, as well as a few lesser-knowns like Northeast Mississippi, Fayeteville State, Carnegie Melton, Mankato State and Coolidge College. One section is devoted to Arizona high school helmets, another is set aside for professional teams.

All (or most of) his helmets are still on display in the establishment, located at 6727 North 47th Avenue in Glendale. And although Beyer has been gone for more than two decades, it’s still known as Max’s Sports Bar.