The Mysterious Snoopy Rocket in Wikieup 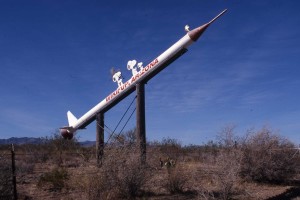 WIKIEUP — On the north side of town, a white rocket ridden by four cartoon characters welcomes visitors to Wikieup. The rocket appears to be a sawed-off telephone pole, painted white and outfitted with a red nose cone and tail fins. The astronauts are wood cutouts of a dog named Snoopy, his feathered friend Woodstock, his brother Spike and an unnamed junior Snoopy, all patterned after the Peanuts comic strip.

Apparently, the fake space ship was erected by a couple of winter visitors from Michigan in the early 1990s. Then they sold out, moved back home and left Snoopy and his mates stranded on a desert launch pad. The property is surrounded by fencing and signs warning trespassers to stay away or they might be set upon by snarling dogs.

The “sculpture” is on the west side of US Highway 93, which serves as Wikieup’s main drag.