While far removed from the thick of the Civil War, some fighting and territorial conquests extended here to present-day Arizona, including the war’s westernmost battle. 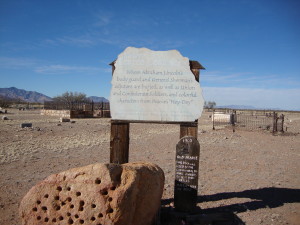 Sign at the Pearce Cemetery, courtesy of Paranormal Intuitive Investigations. (Click to enlarge.) “Where Abrahan Lincoln’s body guard and General Sherman’s adjutant are buried, as well as Union and Confederate Soldiers, and colorful characters from Pearce’s “Hey Dey.”

Sierra Vista-based Paranormal Intuitive Investigations recently stumbled across an interesting relic from this time during an historical investigation at the Pearce Cemetery – a sign and gravestones commemorating both Union and Confederate soldiers, including George H. Platt, member of the Union Light Guard of Ohio and bodyguard of President Abraham Lincoln. Platt also reportedly served as a member of Tombstone’s Burnside Post, Grand Army of the Republic. (See the gravestone on Find A Grave.)

“We were out there doing a pre-investigation of the cemetery because of the history with the town and mines,” said Rhonda Reid, intuitive and co-owner of Paranormal Intuitive Investigations. “We had no idea that someone of such great importance was buried there more than 100 years ago. This is very exciting for us.”

Upon the discovery, Reid researched the historical records and submitted the information to the History Society of Pearce and the Old Pearce Preservation Association. A decision is pending whether the grave site can be officially marked in honor of Platt’s service. Little is known about Platt, but this find could open the doors for additional research.

To see the site for yourself, take Highway 191 to Pearce Road through old Pearce to Memorial Drive. This road will take you directly to the Pearce Cemetery.

Founded in 1893, Pearce is one of Arizona’s last boom towns. At its height, the population hovered around 3,500. While mainly a ghost town now, a few families still reside there. Learn more about Pearce from the Pearce Sunsites Chamber of Commerce.