Whatever Happened to Ike Clanton? 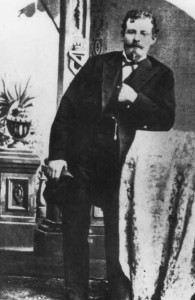 Ike Clanton survived the infamous shootout at the OK Corral.

Do you ever get to wondering whatever happened to Ike Clanton? He survived the infamous Gunfight at the OK Corral, but then where’d he go?

Well, he died anyway. Fatally wounded in a different shootout.

After leaving Tombstone when the smoke from the OK Corral incident had cleared, Ike and his brother Phineas moved up north and began ranching in Graham County. But he became involved in such things as illegal cattle appropriation (rustling) and more gunplay. Eventually, he was shot and killed by a private investigator. Few mourned his death. A local newspaper summarized it like this:

Thus ended the wild career of poor, deluded, misguided Ike Clanton. He sowed to the wind and has harvested the whirlwind, and his harvest is gathered into a narrow house, six feet by two, and the panther, wolf and bear growl a fitting requiem over his grave. His end was typical of his life — swift, rough and the hardest that could be the fate of any mortal man. Let us hope it is for the best.