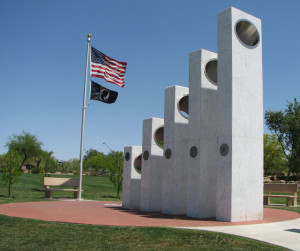 Anthem’s new Veterans Memorial is impressive, touching and monumental and, in a way, most unusual. It is composed of five large marble pillars of varying height, standing in perpendicular perfection about two feet apart. Each has an angled circle cut through the stone, and the pillars are so well aligned that the circles form a downward channel.

The pillars represent the five branches of the United States military, and once a year, they are involved in something curious. Every November 11, Veterans Day, at exactly 11:11 a.m., the sun shoots a beam through the channel to cast a circular light on a mosiac representation of the Great Seal of the United States. It’s a spectacular combination of architecture and astronomy.

The memorial is located in the Community Park, 41703 N. Gavilan Parkway, in the Anthem subdivision north of Phoenix along I-17.