Step Back in Time at Tuzigoot National Monument

CLARKDALE – Around 1,000 AD many of these stones were first put into place by the Sinagua, an ancient Native American tribe of agriculturists that once frequented today’s Verde Valley. 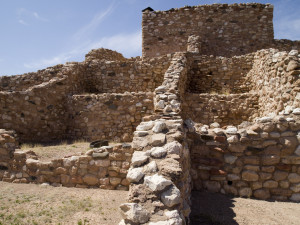 In the 1930s, many of the rooms at Tuzigoot were reinforced with a mortar containing concrete. It’s slowly being replaced with a softer mortar that will better preserve the remaining historical material. Photo Credit: Kevin Korycanek

Now called Tuzigoot (Too-zee-goot), this remarkable 110-room village is nearly intact. While much has been reconstructed to enhance the authentic experience, about 60 percent remains in original form. For centuries it was buried beneath dirt and rock atop this hillside until it was excavated in the 1930s. The ruin was named by an Apache member of the excavation crew. Tuzigoot means “crooked water,” which refers to nearby Pecks Lake.

A museum was built next to the monument in 1935. It houses ax heads that were found on the site and may have been used to cut the wood beams supporting the roofs of the ruin. Other artifacts of the time are on display, too.

You can walk through the museum and these ancient rooms, gaining a glimpse of what life was like for this ancient tribe. There is a self-guided, 1/3-mile loop trail that guides you to the rooftop. 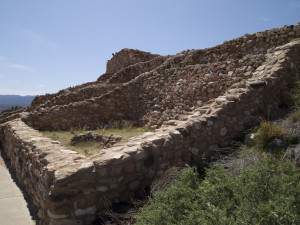 Atop the ruin, you’ll find 360-degree views of the area including Tavasci Marsh (one of the largest marshes in Arizona) and the Verde River – a region once scattered with crops such as squash, corn, beans and cotton. Sometimes you can also catch a small pack of mules near the base who have made the area home in recent years. Today, the top of this monument serves as the official weather station for Cottonwood.

Bird watchers will also want to take the ½-mile jaunt to Tavasci Marsh. It has been designated as an Audubon Society Important Building Area and is home to one of the state’s most diverse bird gathering spots. 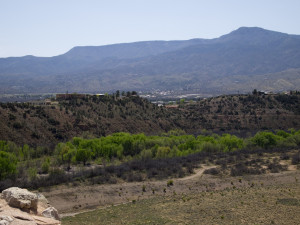 View of the Verde River and Clarkdale atop the Tuzigoot ruin. Photo Credit: Kevin Korycanek (click to enlarge)

At the height of the Sinaguan’s time in this region – in the late 1300s – it’s believe about 250 people lived here. The Sinaguan disappeared from the region around 1400. It’s not known for sure what happened to them. Some theorists suspect environmental issues, warfare, disease or politics. Others think they went to live with Hopi.