What’s the Story Behind the Building Foundation on Top of Shaw Butte?

Excerpt from Valley 101: A Slightly Skewed Guide to Living in Arizona, a collection of Clay Thompson’s columns for The Arizona Republic. (Originally published January 21, 2001.) 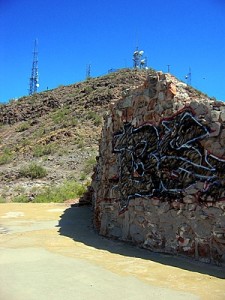 Cloud 9 foundation on top of Shaw Butte in Phoenix. Photo user-submitted on Yelp by Mr. K.

Q: Near the top of Shaw Butte in Phoenix is the foundation of what must have been a large building. What was it?

A: We turned to the exceedingly helpful Jeff Spellman, a Phoenix parks ranger and Sunnyslope native who knew all about it.

The foundation is all that remains of the Cloud 9 restaurant, which in its day was one of Phoenix’s swankiest eateries.

Patrons were shuttled up the rough road to the Cloud 9 in four-wheel-drive vehicles and, as they ate, enjoyed spectacular views of the Valley.

Regrettably, the Cloud 9 burned to the ground early on Nov. 8, 1964, and was never rebuilt. The site later became part of the Phoenix Mountains Preserve system.

How to get there: Take SR 51 North to Cactus Road. Turn left. Cactus becomes Thunderbird Road. Turn south on 7th Street. The visitor center and parking is located on the right side of the road. Learn more from the City of Phoenix.