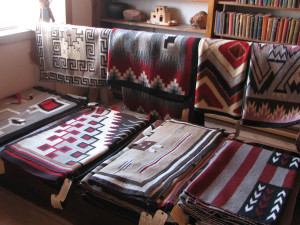 It is the restored Hubbell Trading Post that sat vacant for years on the western edge of downtown. It was built in 1878 by John Lorenzo Hubbell, who also built the more famous Hubbell Trading Post that is now a National Historic Site at Ganado. The Winslow post was used primarily as a shipping center because the railroad passed through town. It served in that capacity until 1950, when it was converted into office space. Then it was unoccupied from the late 1990 until 2009, when it was reopened as the Chamber office. Now it features a spacious visitor center with display areas for Native American artists, historical collections, and visitor information.

Some of the old signage and other markings are still visible on the exterior, making it well worth a visit. It’s located at 523 West Second Street.