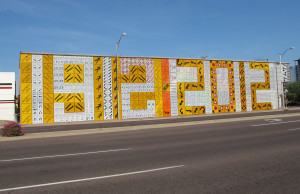 PHOENIX – Those who drive by an old warehouse in downtown Phoenix might think it’s a hasty repair job thrown onto the side of the structure because the entire surface is covered with highway signs. Signs like “Do Not Pass,” “Reduced Speed Ahead,” and “Keep Right Except to Pass.” There are more than 500 of them. Yet they aren’t a bad repair job, they’re art. Michael Levine, a Phoenix real estate developer, had them attached to the building in honor of Arizona’s centennial celebration, held last year.

Those who take the time to look will notice that integrated into the signs are the numbers 1912 and 2012, denoting Arizona’s 100 years of statehood. Levine bought the signs from an Arizona state surplus yard more than a decade ago and used them to promote his agency, which specializes in buying and restoring old abandoned warehouses. But in 2011, he decided to put them to centennial use. He used a computer to lay out the design. Then crews using scissor hoists and battery-powered screwdrivers worked for more than 10 days and used 3,000 screws to affix the signs to the warehouse.

The building is located on the northeast corner of Seventh Street and Lincoln Avenue.