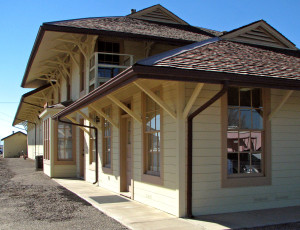 WILLCOX — Old railroad depots have disappeared at an alarming rate all across the country, which is a misfortune because they were wonderful old buildings filled with strange clicking sounds and the delightful aroma of the polish used to keep the floors nice and shiny.

But some have survived and put to good use. In Douglas, the old depot is now a police station. In Flagstaff, it’s a visitors bureau. In Skull Valley, it’s a small museum.

And, in a scenario befitting the Old West, the citizens of Willcox rode to the rescue of their beloved depot, built by the Southern Pacific in 1880 and now the only remaining original redwood framed station in Arizona.

The depot was threatened with demolition when passenger service to Willcox ended but, after a public outcry, the railroad sold it to the city for one dollar, but with the stipulation that it had to be moved to allow the addition of new tracks. Using donations and grants, the city got the job done. Most of the interior is now used for city business, but the lobby is a mini-museum where a short historical video narrated by singing cowboy movie hero and Willcox native Rex Allen runs continuously.