Is Fishing Allowed in the Valley Canals?

Excerpt from Valley 101: A Slightly Skewed Guide to Living in Arizona, a collection of Clay Thompson’s columns for The Arizona Republic. (Originally published August 5, 2001.) 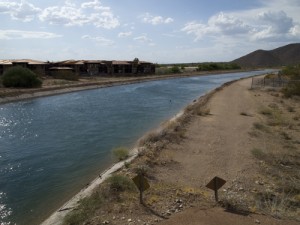 One thing: The canals are well-stocked, at considerable expense, with white amurs, an Asian fish that eats weeds and thus keeps the canals flowing. It is not legal to keep a white amur you take from the canals. Frankly, we cannot imagine why you would want to do so anyway, unless perhaps you are thinking of starting a rival canal system.

As to the other fish, there are, among other things, carp, bass, catfish and sometimes trout in the canals, and you may keep what you catch.

“There is no problem eating them. It’s just lake water. It would be like fishing at Saguaro Lake,” said Scott Harelson, a spokesman for the Salt River Project.